The Agathon wins a Brag Medallion 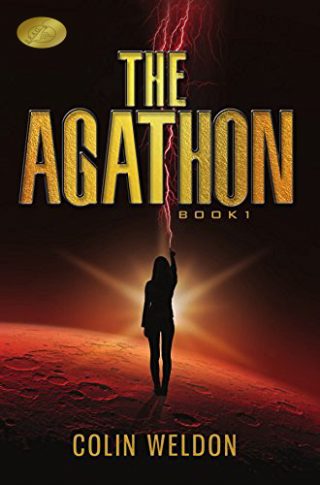 I’ll be honest. When writing my first novel I had absolutely no idea what I was doing. None. If you had of asked me about character voice development three years ago I would have looked at you like a deer in headlights. The funny thing about writing anything is the sudden appearance of characters that in of themselves are supposed to be fully-fledged human beings that just pop into existence because you need them to tell a story. I am thirty six years old and I am very much still trying to figure myself out so how the hell was I supposed to figure out the nuances of a sixty something year old scientist living on Mars, let alone the inner workings of my twenty something female lead protagonist, but there you are, looking at a blank page about to pop a person into existence in the hopes that that person will seem not only real but have their own hopes and fears and strengths and weaknesses. Hemingway said that “The first draft of anything is shit” and boy was he right so don’t be discouraged if your first read through makes you want to close that laptop and take up botany. Writing a novel is one of the toughest decisions a writer can make and finishing one to a standard that you yourself are happy to put out into one of the most hyper critical markets in the world takes not only courage, but a leap of faith in yourself that comes from a belief someone, somewhere might enjoy reading your tale. To begin any story you need a protagonist. You can’t tell a story without one. I do not by any means believe that I have found the right formula. My plethora of rejection letters from publishers will testify to that. I continue to knock on doors and send out manuscripts in the hopes of finding that ever-elusive deal but I keep trying and will continue to try because as any writer knows we don’t do it because we want to we do it because we simply have to. I love writing. I love writing characters and trying to tell stories that hopefully some will find entertaining and engaging enough to spend the $0.99 on kindle to give them a go.

Anyway, I digress. Characters! You need them. They are the lifeblood of a story. Here’s how I do it. Take my advice with a pinch of salt as every writer has his or her own little techniques for character voice. A brilliant little program that I am sure you are all very much aware of is a thing called Scrivener. In that program there is a section dedicated to characters. It’s a blank page that lists the most important aspects of beginning to think about how your characters think and who they are. Start with the easy bits first. What is your characters name? This is the fun part. Scrivener actually has a really cool name generator feature that you can spend hours on picking their names. I never change a characters name one they have had some page time, as it feels weird to do so. As their mannerism and habits become the norm in the story, they actually start to form their very own skin and personalities, sometimes all by themselves. Spend time on motivation. That’s a really important one. What does your character want? What the obstacles both internal and external preventing that character from getting what they want. The internal obstacles are the juicy bit of a character’s mind that tortures them. Memory, trauma, broken hearts, torture, bullying, failure, disappointment, regret, mental illness and all that sort of stuff. For example the lead protagonist in The Agathon, Carrie, is haunted by the death of her mother at the very start of the novel. She is also having a physical internal battle as her body is mutating for some reason and she has not told anyone about it. She is becoming telepathic and manifesting powers. Internal obstacles are anything that the character is fighting within themselves while trying to lead a normal life. External obstacles are anything preventing a character from achieving an objective. For example being stuck on a planet with a broken spaceship while the planet slowly breaks apart. A lot of character voice comes from the own authors “what if” questions that they ask themselves when they put a character in a particular situation. For example: what if your character, who you know is a psychopath and suffers from a loose temper, finds their partner in bed with another person? The voice of the character would react in a very unique way only appropriate to that characters motivations and internal obstacles. After practice, you actually begin to hear the voices of your characters in your own head as they make decisions and choices when they speak to each other. I often wonder if authors don’t develop multiple personality disorders over the years. You really start to believe that these people actually exist. At the moment, I am working on the third Agathon book and it’s like coming home after being on holidays and meeting old friends for a drink. They become such an integral part of your life for so long that they seem to exist in a sort of perpetual writer’s universe where fictional people live out their existence. The Imaginarium. That’s what I call it. After the ‘Imaginarium of Doctor Pernassus.’ A characters voice is built on the initial building blocks of what their purpose in your novel is going to be.

Writing dialogue in a characters voice is important. Think about accent, inflection, little quips and slang words that character might use. An Irish person will use very different words than an American for certain things. Such a ‘Craic’. If I was in the US and I asked someone where the best Craic was I would probably be arrested but in Ireland that phrase is used to indicate something which is fun or entertaining, not the class A drug. Some characters might swear more and some may be more reserved. Try listening to people in every day situations and try picking up some of the differences. I use a lot of family referenced in my books. Some of the best character voices can be seen from close family and friends because you have had the most exposure over the years to the dysfunctional way families tend to interact.  Don’t be afraid to experiment and above all else have fun with it. Character voice can be the most entertaining part of writing a book and watching them develop is, in my experience, one of the most rewarding things about writing.